Every time you visit Brandywine Airport these days it looks a little different. Construction projects on the scale we’re doing at N99 take a little time to get rolling, but right now is the exciting time when visible changes occur almost constantly. 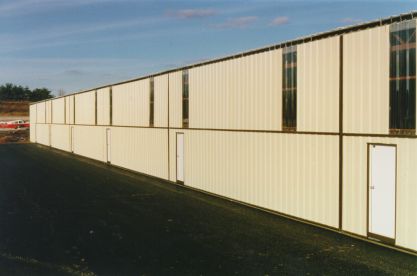 Hangar construction has been the major focus for the past couple months, and will continue to be so until all 60 hangars are complete, at which time we’ll shift to the restaurant and other projects. We won’t stop until Brandywine airport is the best small airport in the area!

T-hangar Row C (above) is nearly complete in this picture from 12/28/97, and gives an excellent idea of what most of the rows will look like when finished.

Row D (below) is about half done, and reveals the metal framework that gives the Erect-A-Tube hangars their strength. The largest of the T-Hangar rows with 15 separate units, Row D is the furthest west set of T-Hangars currently planned. See the Hangar Plans page for details about how the rows are laid out. 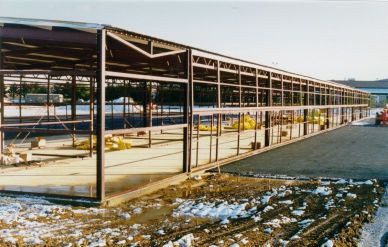 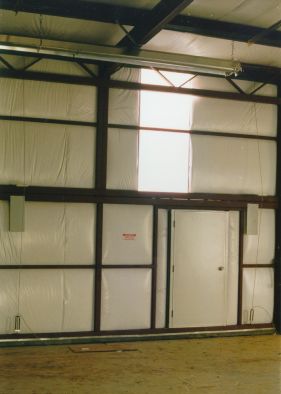 One useful feature of the hangars is the 90%-clear plastic windows on the upper half of each bi-fold door. Each T-Hangar will have two such windows, positioned to provide optimum illumination during daylight hours (right).

For additional light, and for use at night, all hangars will have electric lights. Electric service will also be needed to operate the electric motors that power the bi-fold doors… trust me, they much too heavy to lift by hand! 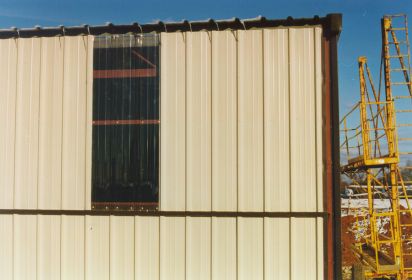 Below you can see the steel structure inside the bi-fold doors: 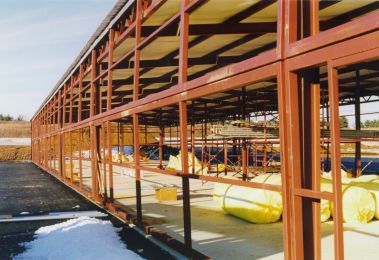 The yellows rolls of fiberglass insulation are being installed as the metal sheeting is attached to the frame. Besides reducing the cost to heat a hangar, insulation will minimize condensation which might otherwise form on the roof of a hangar and drip onto the aircraft stored within. 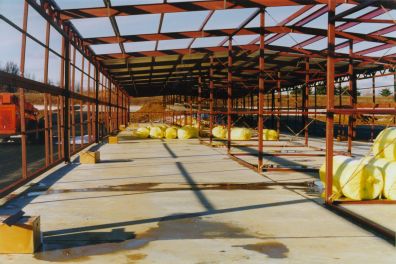 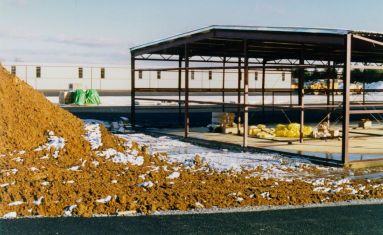 To the right you can see Row D under construction in the foreground, with Row C in the background. In between these two rows of T-hangars will be a row of 10 larger Corporate hangars.

In keeping with our plans to go “first class” whenever possible, the floors of all hangars are concrete, not asphalt or dirt. This should provide a smooth surface that will not buckle as temperature changes cause cycles of expansion and contraction.

One significant accomplishement in December 1997 was the paving of the taxiways between the these rows of hangars. We have finally left the “mud field” of the first phase of construction behind us! A final layer of asphalt will be laid on top of this rough layer once all construction is complete.

The final two rows of T-hangars (A and B) to the east of Row C will be constructed once the aircraft located in that area of the airport have been moved into the completed hangars and onto the paved area t the west of Row D.

Scroll back to top